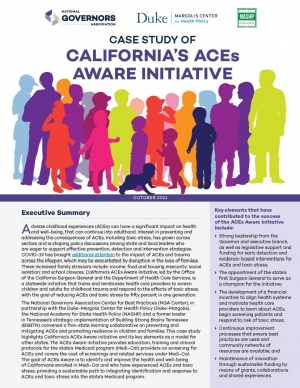 Adverse childhood experiences (ACEs) can have a significant impact on health and well-being, that can continue into adulthood. Interest in preventing and addressing the consequences of ACEs, including toxic stress, has grown across sectors and is shaping policy discussions among state and local leaders who are eager to support effective prevention, detection and intervention strategies. COVID-19 has brought additional attention to the impact of ACEs and trauma across the lifespan, which may be exacerbated by disruption in the lives of families. These increased family stressors include: income, food and housing insecurity; social isolation; and school closures. California’s ACEs Aware initiative, led by the Office of the California Surgeon General and the Department of Health Care Services, is a statewide initiative that trains and reimburses health care providers to screen children and adults for childhood trauma and respond to the effects of toxic stress, with the goal of reducing ACEs and toxic stress by fifty percent in one generation.

The National Governors Association Center for Best Practices (NGA Center), in partnership with the Duke-Margolis Center for Health Policy (Duke-Margolis), the National Academy for State Health Policy (NASHP) and a former leader in Tennessee’s strategic implementation of Building Strong Brains Tennessee (BSBTN) convened a five-state learning collaborative on preventing and mitigating ACEs and promoting resilience in children and families. This case study highlights California’s ACEs Aware initiative and its key elements as a model for other states. The ACEs Aware initiative provides education, training and clinical protocols for the state’s Medicaid program (Medi-Cal) providers on screening for ACEs and covers the cost of screenings and related services under Medi-Cal. The goal of ACEs Aware is to identify and improve the health and well-being of Californians enrolled in Medi-Cal and who have experienced ACEs and toxic stress, providing a sustainable path to integrating identification and response to ACEs and toxic stress into the state’s Medicaid program.