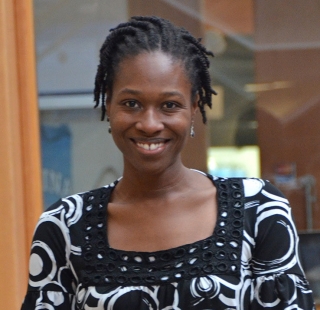 Whitney R. Robinson is an epidemiologist who specializes in quantitative methodology for studying health inequalities.

Dr. Robinson is a Faculty Epidemiologist at the Duke University School of Medicine in the Department of Obestetrics & Gynecology's Division of Women's Community and Population Health. Dr. Robinson currently leads an NIH R01 that uses health care and administrative, data to understand causes of racial/ethnic differences in treatment of conditions like fibroids, abnormal uterine bleeding, and endometriosis in the premenopausal period.

The central motivation of Dr. Robinson's research is showing how social and environmental factors underpin race and sex differences in health -- even for inequalities sometimes presumed to be mostly biologically based, such as racial differences in cancer incidence or rates of hysterectomy. A common theoretical underpinning of her work is the life course framework, particularly hypotheses that exposures during critical periods in utero; during childhood; and at other life stages, such as the menopausal transition, have enduring effects on later adult health.

Her work has found that perinatal and childhood poverty and stress may predispose females, more so than males, to adult obesity, potentially explaining the large obesity gender gap observed among Black Americans. She has used age-period-cohort analysis to predict future trends in obesity prevalence in Millennials. Her work has shown that childhood obesity is not a major driver of the Black-White disparity in prostate cancer incidence. Ongoing research investigates drivers of racial differences in treatment of non-cancerous gynecologic conditions and the "obesity paradox" in survival among people diagnosed with renal cell carcinoma (a type of kidney cancer).