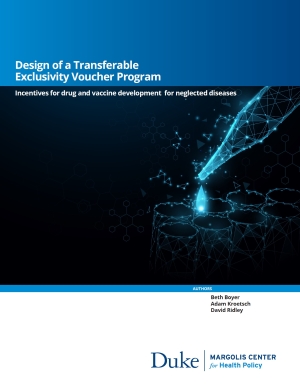 Developing a drug or vaccine is typically unprofitable when the people in need live in lower-income countries. For this reason, the drug industry neglects many infectious diseases. Drug development is also unprofitable when the existing market is limited and the interventions are aimed to address future risk, such as bioterror attacks, infectious disease pandemics, or antibiotic-resistant pathogens. The lack of commercial incentive discourages companies from investing in drug development for such diseases.

Governments and foundations have created incentives for drug and vaccine development for otherwise neglected diseases. The incentives fall into two categories: pull mechanisms and push mechanisms.

Push mechanisms provide up-front support to drug developers to reduce their costs and foster innovation. Examples of a push mechanism are a tax credit, such as through the Orphan Drug Act, or direct funding through grants and contracts, such as funding from the US National Institutes of Health (NIH). For example, the NIH and the Bill & Melinda Gates Foundation spent a combined $300 million on push funding for malaria in 2019. The combined investment of all other governments and foundations totaled approximately $200 million of push funding for malaria that same year. The FDA’s Tropical Disease Priority Review Voucher program offers a pull mechanism worth about $100 million for a new malaria drug (or drug for other eligible neglected diseases). Yet, the need for investment is far greater as successful development of a new drug costs more than $1 billion dollars.