REALIZING THE BENEFITS OF BIOSIMILARS: What the U.S. Can Learn from Europe 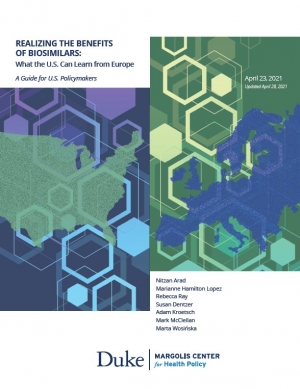 REALIZING THE BENEFITS OF BIOSIMILARS: What the U.S. Can Learn from Europe

The United States enacted a pathway for the approval of biosimilar medical products in 2010, but uptake and use of these products have lagged greatly in comparison to Europe. As a result, it is likely that the U.S. has forgone considerable savings that could have accrued from competition from lower-priced biosimilars as compared to those of the original reference products. This paper explores the differences in the market conditions for biosimilars in the U.S. compared to various European countries that have contributed to the gap in biosimilar uptake and use. It also offers key lessons from the European experience that could inspire changes in U.S. regulatory and payment policy and encourage far greater use of biosimilars. Among the most important are streamlining the regulatory approval process for biosimilars at the U.S. Food and Drug Administration; taking steps to deter developers of the original reference products from product creep and obtaining multiple patents on incremental changes to the reference product that delay or block biosimilars competitors; revising Medicare payment systems to incentivize biosimilars use; and undertaking communication with patients, providers, and others to raise awareness and trust of biosimilars and fight misinformation.